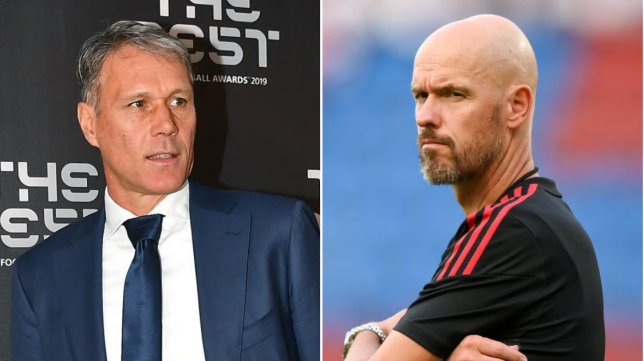 The Dutch legend feels United must adjust their approach to pre-season (Pictures: Getty)

Former Netherlands and Ajax boss Marco van Basten has hit out at Manchester United’s board for scheduling such a demanding pre-season tour and feels it has severely hampered Erik ten Hag.

The Red Devils have made a miserable start to the new Premier League season, losing back-to-back matches against Brighton and Brentford to leave them bottom of the table for the first time in 30 years.

United conceded four times in the first 35 minutes of their most recent clash against Brentford, while Ten Hag is the first manager since John Chapman in 1921 to lose his first two matches in charge of the club.

There are a host of factors which have impacted United’s poor start, from injuries to a lack of new signings, but Dutch legend Van Basten feels the biggest contributor has been United’s globe-trotting during pre-season.

‘What I find strange is that every year in preparation they make a kind of world tour,’ Van Basten told Dutch broadcaster Ziggo Sport.

‘That kills the group. It’s ridiculous, idiotic. They have to stop doing that. Physically, it’s just heartbreakingly bad.

‘They do everything they can to make more money, but it’s nonsense.’

Ten Hag’s side have made a woeful start to the season (Picture: Getty)

United spent two-and-a-half weeks travelling around Thailand and Australia during their pre-season tour and looked impressive in their four matches, notably hammering Liverpool 4-0.

However, both Christian Eriksen and Lisandro Martinez were signed with around a week still left of the tour and were unable to link up with their new team-mates until they returned from Australia.

A week after their travels Down Under, United then travelled to Norway to play Atletico Madrid and, the very next day, hosted Rayo Vallecano at Old Trafford in back-to-back friendlies.

When Louis van Gaal was in charge of United he also complained about the gruelling nature of the club’s pre-season tours and fought hard to reduce the amount of travelling.

‘We have to prepare for the season and when you have commercial activities and dreadful distances, having to fly a lot and the jet lag, it is not very positive for a good preparation,’ he said in his first summer at the club back in 2014.

Shortly before he was axed two years later, Van Gaal had also complained about an upcoming tour to China in the summer of 2016 – though he would ultimately not be in charge, having been replaced by Jose Mourinho.

‘I know a club like Manchester United must do that, but it is not a very good preparation,’ said the veteran Dutch coach, having negotiated the club down from a two-week stay in China to just eight days.

MORE : Cristiano Ronaldo promises to give his side of Manchester United transfer saga in upcoming interview

For more stories like this, check our sport page.

Ten Hag: We’re working on it together